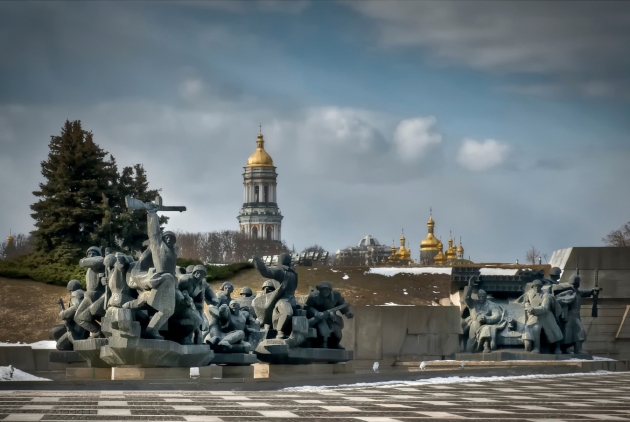 Eleven weeks after Viktor Yanukovich fled Kyiv the stakes for Ukraine, and geopolitics, are clear. A set of shrewd western responses may or may not keep Ukraine whole. More broadly, the international norms of state sovereignty and territorial integrity are under assault, and will come undone at the world’s peril.

Russia seeks to dismember Ukraine using a unique, hybrid strategy that just might work. If the U.S. leads from behind, Russians in eastern Ukraine lead from the shadows, cloaking thuggish revanchism in the language of human rights and self-determination.

Ukraine’s inability to govern itself, every single dreary day since independence, is its original sin, and the pending election between the “gas princess” and the “chocolate king” doesn’t hold out much prospect for progress. When Polish Foreign Minister Radek Sikorsky says “I think Ukraine is paying the price of 20 years of strategic illusions of being able to be neutral and of not paying enough attention to their security sector,” you can almost see his lips mouthing “raving, criminal incompetence.”

In a virtual tie for second biggest problem, Russian perfidy leads European ambivalence  by percentage points. Who do you favor to pull into the lead in this race? The authoritarian, deniable mystery troops, or the herd of 28 finicky EU cats led from behind by you-know-who?

Russia’s advocates (including top-notch liberal columnists) argue that the expansion of NATO and the failure of the West to find a role for Russia in Europe, especially during the humiliating years of post-Soviet economic collapse, bred a resentment in Moscow that manifests in the Putin of today.

It doesn’t hold up. Russia is a charter member of the OSCE (even as its proxies in Slavyansk held OSCE observers for a week). It joined the Council of Europe in 1996. From 1998 until the present crisis Russia was a member of the G-8. The Russia–NATO council was created in 2002 at Russia’s request, and Russia joined the WTO in August 2012.

Participation in these clubs hasn’t promoted Russian integration into Europe because Russia’s priority is not integration with Europe. The real cause of Russia’s behavior, Jan Techau argues, “is its archaic understanding of what constitutes a sovereign nation….”

Let’s be clear: Russian disinformation notwithstanding, the Maidan was no Pravy Sektor-inspired Nazi uprising. With a generation and counting lost to corruption, at long last Ukrainians young and old rose up and said, enough. That is what happened.

When Russia calls the interim government in Kyiv illegitimate, recall that the country was left in its current predicament when the Kleptocrat-in-Chief Mr. Yanukovich fled under cover of night. To Russia. 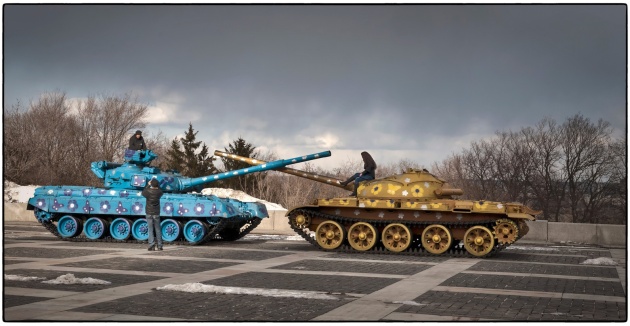 The schism between eastern and western European reaction is no surprise. A history of living with Russia prompts eastern Europeans to call for action. While the big western economies fret over fuel, Poland punches above its weight, proposing policy and suggesting solutions. Prime Minister Donald Tusk makes eminent sense:

“Europe should confront Russia’s monopolistic position with a single European body charged with buying its gas.” He and Sikorski recall that the European Union began as a commodity bloc – the European Coal and Steel Community.

As we’ve all learned by now, at least ten EU states depend on Russia’s Gazprom for more than half their gas consumption. You can understand the big, rich western European countries’ reluctance to respond in a way harmful to their economies.

(To understand it, that’s one thing. But it’s as if the EU considers navel gazing a birthright anymore. We can all see, right before our eyes, all across Ukraine that tiresome as it seems, the scaffolding of the European order occasionally needs maintenance.)

In the U.S. many allow that since people in Crimea and eastern Ukraine speak Russian, maybe they really do want to be part of Russia. Perhaps this comes from unfamiliarity with a far away land, perhaps from an unwillingness to get involved. And this gets to what’s clever about Mr. Putin’s hybrid war.

By incrementally shifting the Ukraine crisis from one discreet event to the next, hostages in Slaviansk one day, a fight in Mariupol the next, Russia frames its incursion as mere skirmishes over faraway, unsavory bits of land, in another context “a quarrel in a far-away country between people of whom we know nothing.” In fact Mr. Putin is challenging the entire order that has more or less governed world affairs since the end of World War II.

“Of course, Obama is not responsible for Russia’s invasion and annexation of Crimea, or for Putin’s massing of Russian troops on Ukraine’s eastern border in an effort to intimidate the government in Kyiv…. Obama is responsible for his administration’s apparent indifference to the fate of the American-built order that has governed world affairs since the end of World War II. Unless he toughens his policies, the rules and norms that have guaranteed peace for so many for so long could lose their force.”

Those rules and norms have accreted because of a lot of very hard work over a very long period. A comprehensive package designed to deter occupation of eastern Ukraine by insigniaed Russian soldiers is needed to help preserve them.

It should start by embracing the Polish Prime Minister’s energy union. It is encouraging that Chancellor Merkel mentioned just such a thing after her meeting with President Obama on Friday.

Other immediate and long term measures should include:

– A demonstration of willingness to wield tools of economic war, including sectoral economic sanctions. At his press conference with Chancellor Merkel last Friday the President tied sectoral sanctions to Russian interference in Ukraine’s May 25th election.

– An increase in laggard NATO countries’ defense spending to the NATO recommended 2% of GDP (only four spend that much now – Estonia, Greece, the United Kingdom and the United States).

– Reinforcement of eastern NATO countries with a symbolic troop presence. This is underway, with U.S. paratroops in Poland and soldiers in Lithuania and Estonia, Canadians to Poland, U.K. and French aircraft patrolling Baltic airspace, Norwegian, Dutch and Belgian minesweepers assembling in the Baltic and Canadian air force jets heading in Romania.

An ambitious, long term, sustained U.S. commitment to supply Europe with liquid natural gas, including a commitment to construct new LNG shipping facilities on the east coast (more on this to come).

The Vladimir Putin of Crimea is far less a friend of the West than the Putin of Chechnya. It is ironic that Vyachislav Ponomaryov, the self-appointed “mayor” of Slaviansk, is precisely the kind of warlord Mr. Putin has worked so hard to eradicate in the Caucasus.

The Russian’s countrymen must miss the irony. Mr. Putin’s popularity last surged like today when he reopened the Chechen wars in 2000.

See more photos from Ukraine in the Ukraine Gallery at EarthPhotos.com.

One thought on “Ukraine: What to Do Now”