Here is an excerpt from my book Out in the Cold, in which we arrive in Greenland and try to sort out what to do next. Enjoy it:

The men smoking outside the concrete block terminal are not Robert so I ask around inside. The man behind the check-in counter might as well be collecting Arctic tumbleweeds. No flights are pending; no one is checking in.

He does not know Robert.

Together we lean over his counter to look down to the harbor. One boat is speeding away and there don’t seem to be any others. He flips his palms up and shakes his head, “I think you just go down there and wait. That is your only chance.”

Humans inhabit the fringe, the perimeter of Greenland not flattened by the ice cap, and I mean flattened, literally. Even with its thinning, ice reaches three kilometers deep at its thickest, pushing the bedrock into the mantle such that if the ice disappeared, the island would become an archipelago.

You can’t fly to Tasiilaq, the biggest town on the eastern side of Greenland, for lack of sufficient flat space for an airstrip. So we have flown to a gravel strip called Kulusuk Airport. To get to Tasiilaq we must traverse the mouth of the Ammassalik fjord. We booked that online and all we know is, get to Kulusuk and ask for Robert.

We can see our destination twenty kilometers across the fjord behind a few icebergs and a coastline of precambrian rock thrust from the sea long before humanity, possibly even contemporaneous with the first life on Earth.

We invade and insult the silence with our prissy roll aboard carry-on bags, scraping and skipping the damned things down the rough gravel. Show more respect and stand still, and the quiet closes up around you as a vehement, absolute thing.

A man from Cologne with a massive backpack walks ahead of us. He has arrived with no itinerary beyond walking for two weeks. His pack reaches up past his head, bulging with two weeks of freeze-dried food and powdered milk.

Once he walked from Ilullisat to Sisimiut in western Greenland, and that is far, far farther than from here to Tasiilaq and then clear around the island, but that time he was advised that there was no danger of polar bears and he has yet to be so advised here. His itinerary may have to be revised based on local information. Right now he plans to circumambulate Ammassalik Island. He puts great store in the advice of Robert, but none of us know how to find him.

Airport to harbor, perhaps a twenty-minute walk. No boats in sight. Either side of the gravel path, just rock and a little but not much tenacious flora. Our destination across the water is low and bare with mountains rising snow-capped, glaciers embedded toward the top. Clouds tease the ridges but do not suggest a threat of rain. In between individual icebergs, not a field, rise like several-story buildings.

It turns out that two tiny Danish-built fiberglass Poca speedboats, so low slung that the dock hides them both, bob in the sea beyond the dock. Two Greenlandic men stand down there on the shore below the dock, neither in so much as a jacket, enjoying the northern summer.

We ask, “Robert?” and the younger man, with no English, shakes his head no, “Christian.” We and the backpacker, who is expecting the same ride, are at a bit of a loss until we work out, through gestures and goodwill, that Christian is here on behalf of Robert. For us, that is good.

The dock is too high for the boats, and so we scramble down onto rocks to climb aboard and Christian takes the backpacker, Mirja and me screaming across the fjord toward a similar spot on the far shore. Christian, hair stood up to a greased crown, drives standing, and stops us dead in the water alongside this iceberg, then that one, so we can take photos.

We clamber out on a rock where there is no dock at all. Christian motions without words, “up that way,” and makes no move to leave the boat. So off we scramble, not having paid anybody for anything, off to find someone who wants our money. Robert, maybe.

The Inuit seldom keep individual dogs as pets, but rather tether them in groups outside in summer, and we rouse the mild attention of a pack of tethered dogs as we troop up the hill. Inuit sled dogs have two layers of fur, the inner short, like wool for insulation, and the outer longer, coarser and water repellent. That may make them hot today, but overall they are surely chillin’, taking the warm season off, lounging all day except when growling and snapping over territory.

A vehicle makes its way down the hill picking its path, for the way is gravel and bumpy. A slight girl stops to ask that we wait here, drives down the road to drop some camping supplies and returns to drive us to the Red House, a tour shop and hostel run by the famous Robert.

Robert’s reputation should have preceded him. Turns out in 1983, extreme explorer Robert Peroni from the Italian south Tyrol walked across the Greenland ice cap, all the way across the island at its widest point, some 1,400 kilometers, on an 88-day journey.

Now 72, Robert stands before us trim and erect, and above all relieved to find we aren’t planning to stay in his hostel, for he is booked solid as he would hope to be in a very short high season. We pay him for the crossing from Kulusuk, bid farewell, and the girl drives us up the hill to the Hotel Angmagssalik.

There was a time when airline passengers celebrated successful landings. I remember applause in 1986 when my Lufthansa flight landed in Frankfurt from Moscow. I thought it was as likely for getting the bloody hell out of the Soviet Union.

We came over from Iceland today on a brand new, gleaming Air Iceland Bombardier Q400 prop plane, twenty rows two-by-two. Bustling their baby refreshment cart up and down the aisle meant actual work for the flight attendants, compared to the doorman role they play on short domestic flights.

Come time to land, the plane took on a buzz incongruent with today’s humdrum air travel. In a small plane you’ve more of a sense of flying, and when the pilot maneuvered to dip under the clouds and between the mountains, we all craned to be the first to see icebergs, and phone cameras filled the windows. The runway at Kulusuk came up fast and we rode it right to the end lights.

About fifty of the seventy aboard were here for a day trip. Over in the morning, touch the soil, check Greenland off your list and fly back. I met a taxi driver in Reykjavik who said he did as a fifteen year old.

What did they do?

They deplaned, someone took them around the side of the terminal and they watched a man in a costume play a drum and a fat woman dance.

Some months ago he drove a man to do the same and picked him up later that day. What did they do? A drum and a dance.

Order the whole book here in the U.S. or from Amazon in your country. 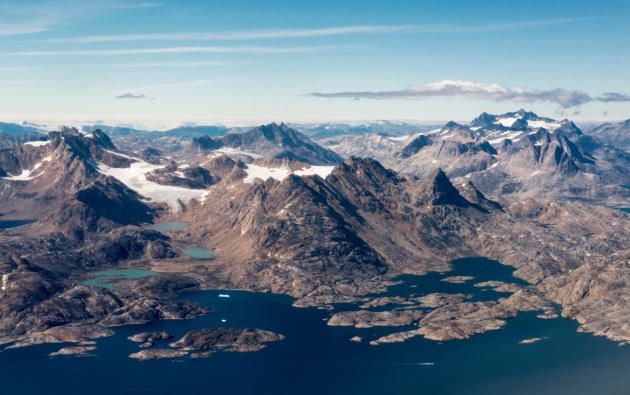 The approach to Tasiilaq from Iceland in high summer

87 thoughts on “Getting to Greenland: Book Excerpt”