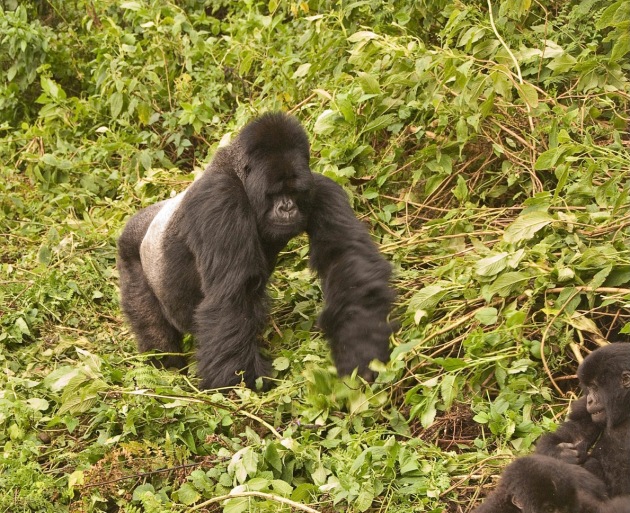 Photography-wise: I had been concerned about the high contrast I thought I’d encounter – sunlight and shadow, brightly sunlit leaves beside dark gorilla coats. We discussed contrast filters in a previous post. In the event, both days we came upon the gorillas in open enough areas that that didn’t turn out especially to be an issue.

I had a useful conversation with a man named Dave a couple nights before. He was proprietor at the Ishasha Wilderness Lodge on the Uganda/Rwanda border, on our drive down from Kampala, and he had gone in to see the gorillas not long before.

He said even if you spot focus you’ll be frustrated that autofocus grabs a twig or a branch or a leaf you might not even notice through the viewfinder, instead of the gorilla just beyond.

He was mostly right. I did use autofocus when it was appropriate, when the gorillas were sufficiently out in the open, but his having made me aware to be ready to flip the switch over to manual was key, and I am grateful.

Since light was likely to be a challenge, I decided to go in this way: I’d set to aperture priority, open up my aperture as far as it would go, and then read my shutter speed as a guide to how low I could set the ISO.

One other bit of essential photo advice: don’t even bother to haul in extra lenses. I know, this is an important photo shoot and it’s expensive and you want to be ready for anything. But you just won’t need it.

One other note: The Virunga Lodge where we stayed, run by Volcanoes Safaris, bills itself as “magnificent” and “stunning” and “The best lodge in Africa,” but the little room around back, where there was power to recharge your camera batteries and plug in your computer, never worked for me. Made a little “pffft” electrical noise that scared the hell out of me when I plugged in my computer. Since I hadn’t brought an extra battery for the laptop, it was frustrating to have to wait a few days until we’d left to see my photos.

So just in case, 1. Bring enough charged batteries for the whole shoot and 2. Consider a battery operated viewer or an extra laptop battery if you want to see your photos right away.

Africa Vignettes is a weekly series most Mondays this summer on CS&W.