After a little more than a month in boiling Southeast Asia we’ve come north to enjoy the rare weeks when Nordic cities empty out into summer cottages and saunas around the lakes.

As we’re a few weeks ahead of the great migration to the summer cottages and saunas all along the lakeshores, we stopped in Helsinki and enjoyed a spectacular spring day in the unpredictable month of May. We’re already on our way to Lake Saimaa where a little cabin awaits us. We’ll leave you with these: 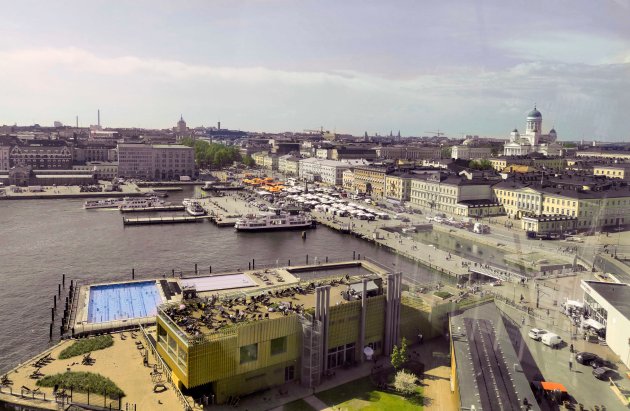 A view back toward town from the Skywheel Helsinki, a newish waterfront attraction. 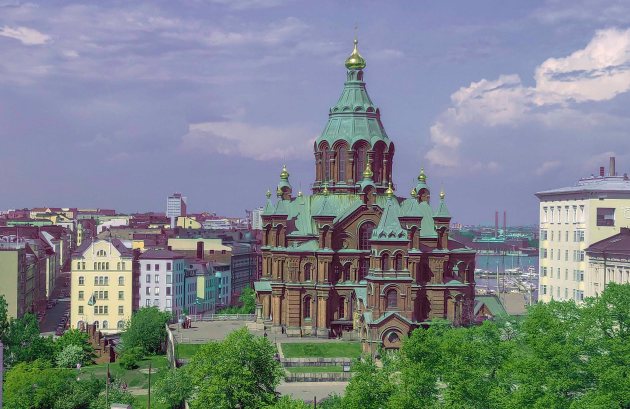 And from the same vantage point, the Uspenski Cathedral, the largest orthodox church in Western Europe, completed in 1868.

Collected photos from this slow trip around the world post here.

When I was seven or eight years old I guess, my mom regularly took me to the public library behind the big shopping center on what was yet to become Elvis Presley Boulevard in Memphis.

I think it has been all those years since I had the general light euphoria and sense of well-being that came with being in such a lovely, peaceful, well-meaning place as Oodi, the new main Helsinki public library last week.

Opened to acclaim last December, on Independence Day eve, Oodi (“ode” in Finnish) is a library, but it’s more than that, it’s a gathering place, a community center, and a dramatic demonstration of one of the ways Finns feel it is appropriate to spend €98 million of public money.

Besides books for borrowing, there are conference rooms, studios for recording and editing audio and video projects, a theatre and various workshops with sophisticated equipment for, for example, laser cutting. There are 3-D printers and extra-wide photo printers and there is plenty of space to spend the day working on your project, or just lounging about.

“The biggest technical innovation by far is the ‘Cube,’ a room with smart walls,” says Vänttinen. “A person can use huge touch screens to transform the room into almost anything through 3D virtual reality. Artists are already planning to use the Cube for digital immersive art exhibitions, and medical students would like to study surgery there, using it as a virtual operating room.”

Let’s have a look. 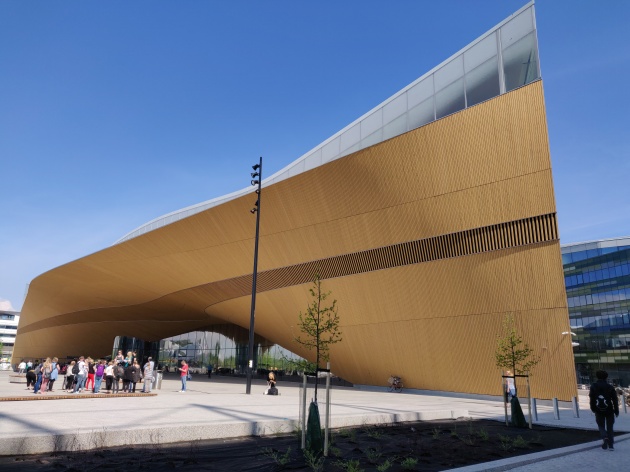 It’s in a central downtown location, just off Mannerheimintie, main street. It’s beside Musiikkitalo, the Helsinki Music Center, home to the Helsinki Philharmonic, the Kiasma Contemporary Art Museum, close to Finlandia Hall and across the street from parliament. 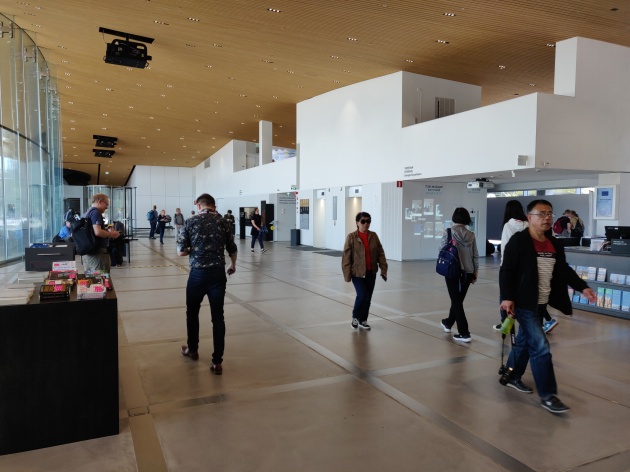 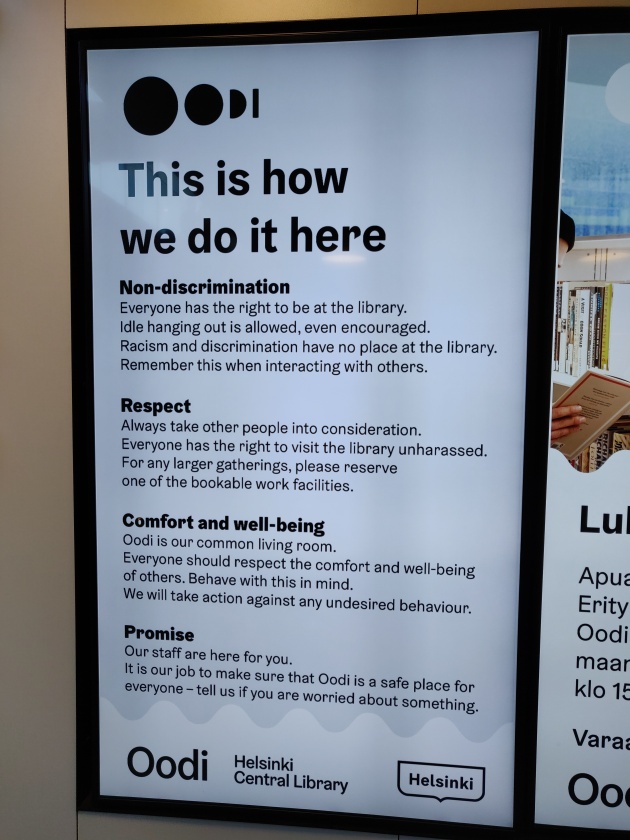 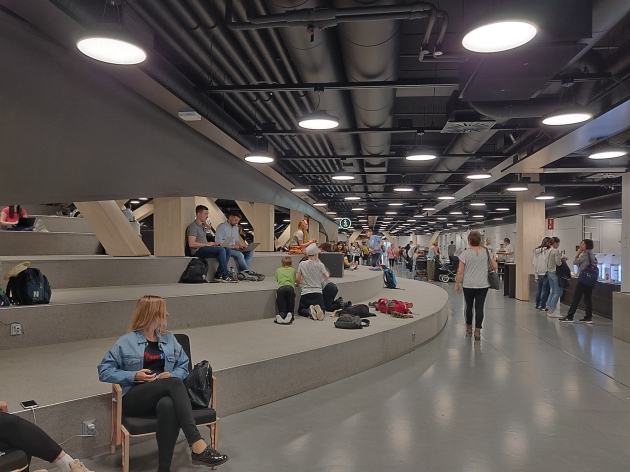 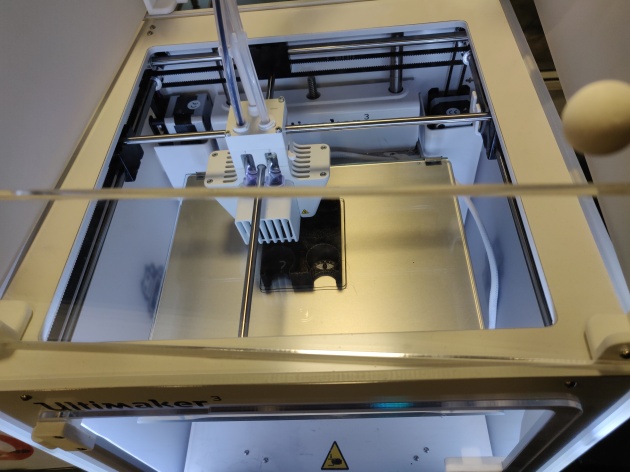 This is a 3-D printer. There’s a suite of these for hire. 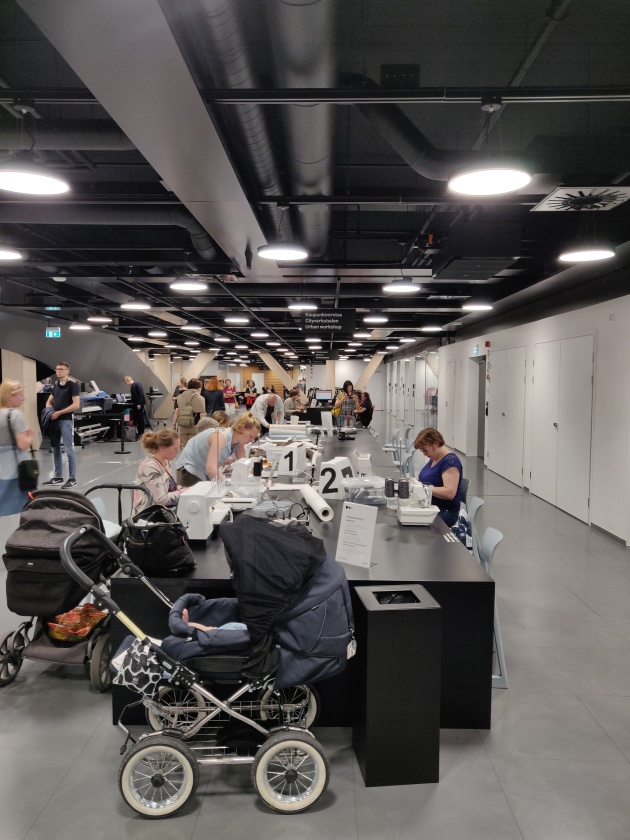 Sewing machines, all in use. 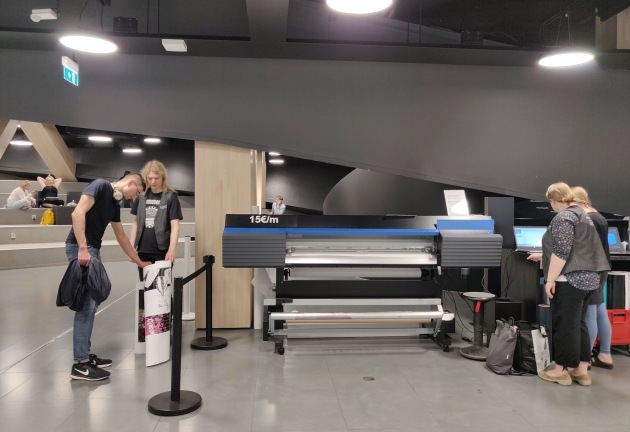 These folks are inspecting the industrial-sized printers available to print your advertising banner, or whatever you might need that’s over a meter wide. 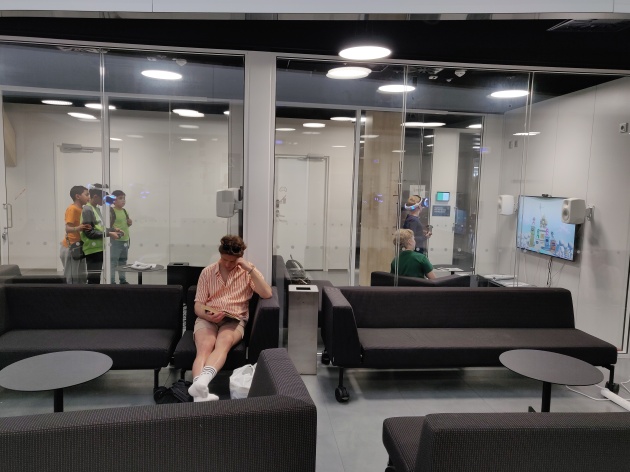 The kids behind glass in these adjacent suites are playing virtual video games. 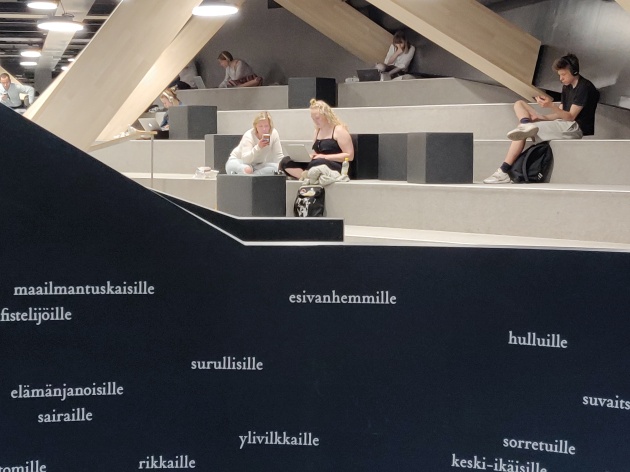 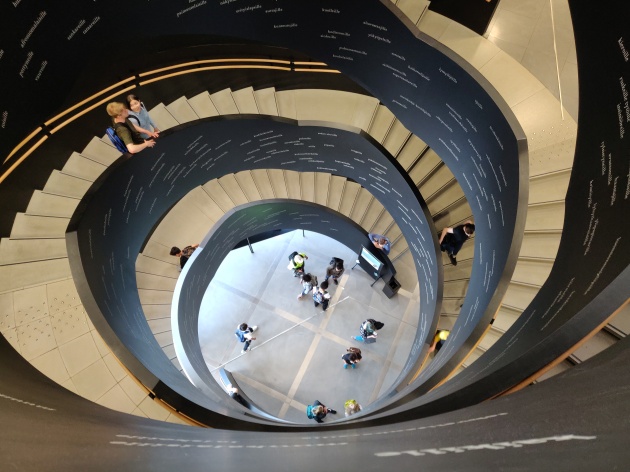 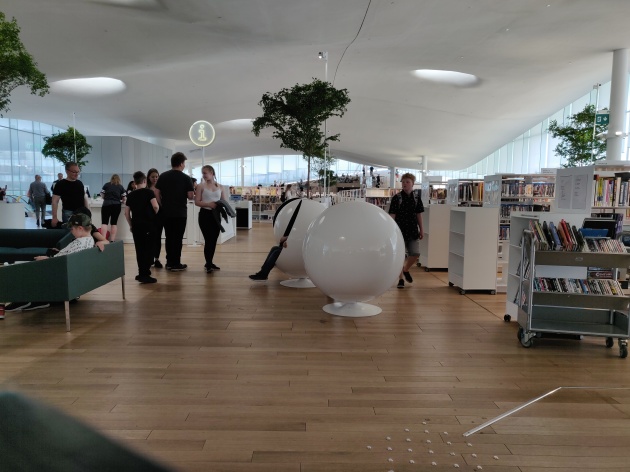 The top floor, with books in Finnish and other languages. Borrow games, comics, graphic novels, cds, movies, training courses for any number of languages and disciplines. 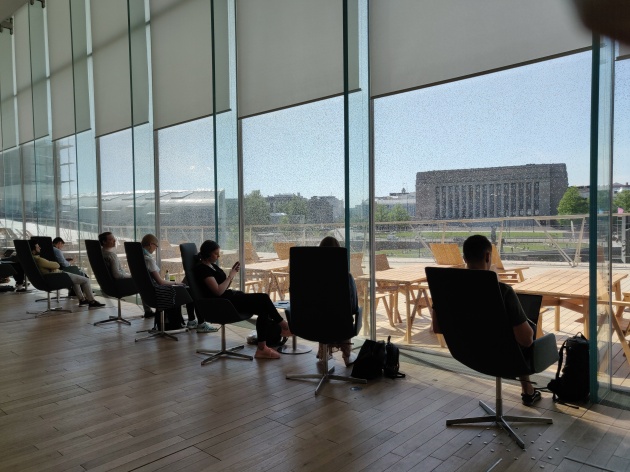 For a sense of the pride of place with which people hold Oodi, this row of chairs faces an outdoor terrace for events, and beyond it, that’s the parliament building across the street. 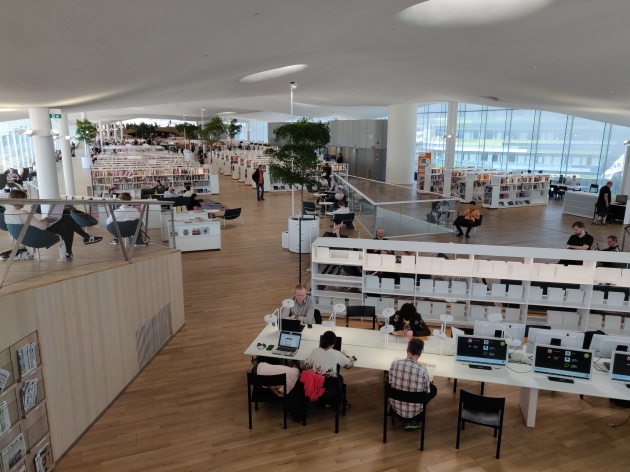 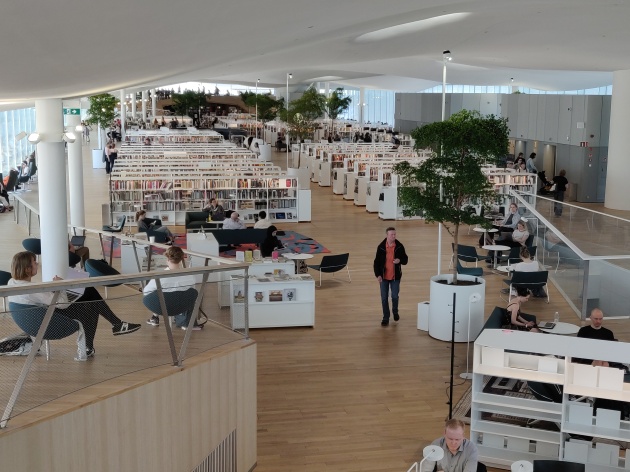 See collected photos from this slow trip around the world here.

First trip in an Airbus A500-900. No overhead bins in the middle, only on the sides. Makes for a roomy feel. Here’s the route, BKK – HEL: 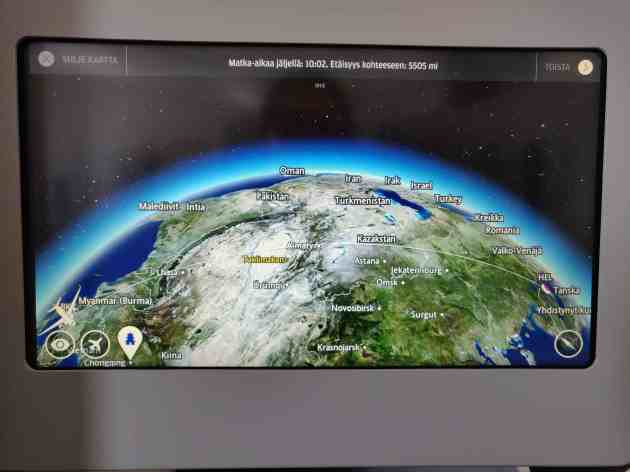 A great feature of this Finnair Airbus is the tail-mounted live camera. Here, in the queue to leave Bangkok Suvarnabhumi Airport: 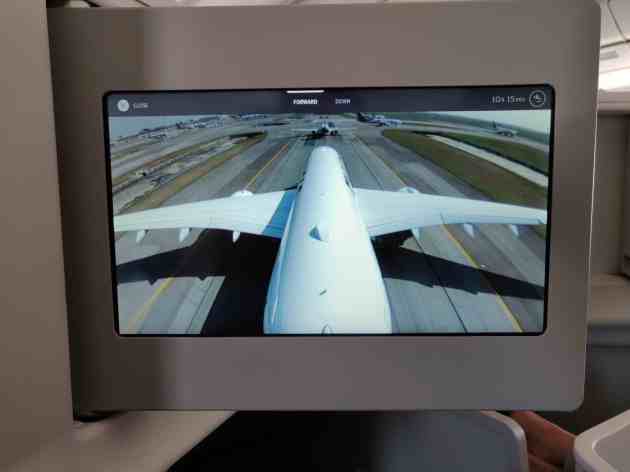 Here, jukin’ out over the Gulf of Thailand: 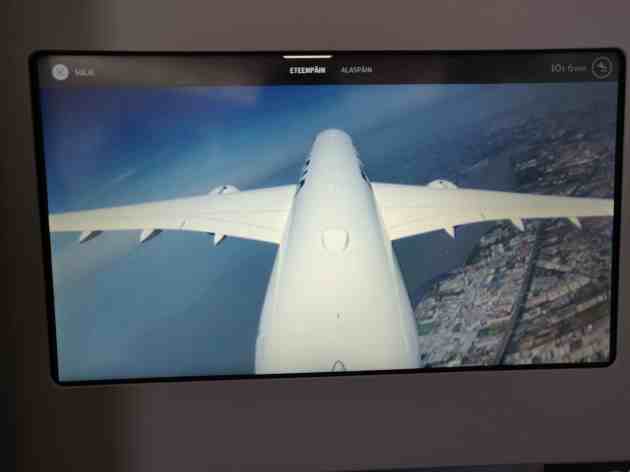 Here, over the Gobi Desert: 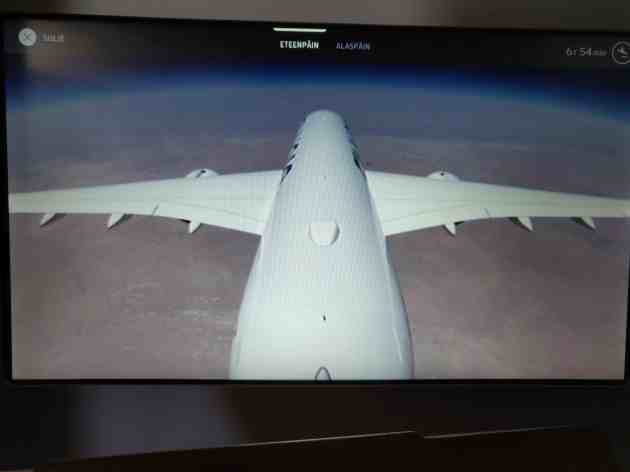 Collected photos from this slow trip around the world here.

A couple more as we begin to finish off our Vietnam visit. Here, one of those tumultuous tropical thunderstorms Ho Chi Minh City was eager for, as the hottest part of the year begins to draw to a close: 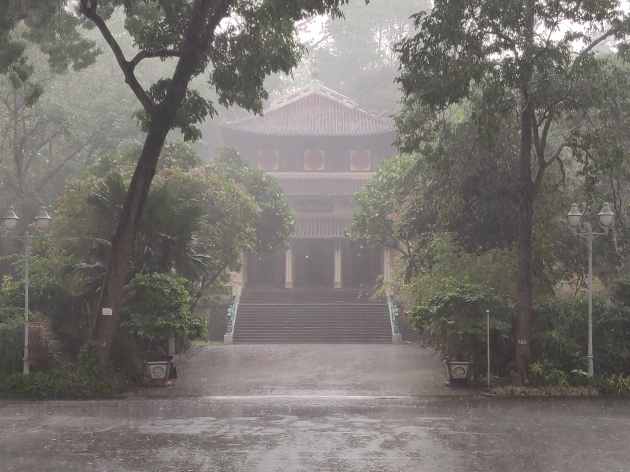 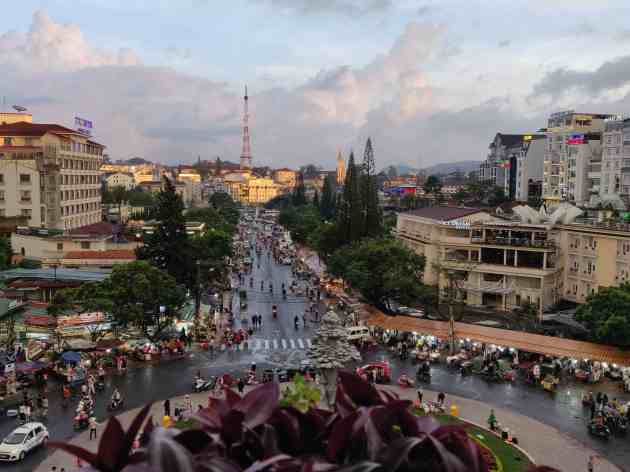 Collected photos from these few months around the world here.

A long flight across Asia follows, and before long we’ll be back in touch from Finland. For the moment (spring 2019) I’ve changed the header above to a nice view over Helsinki from the top of the original Sokos hotel. 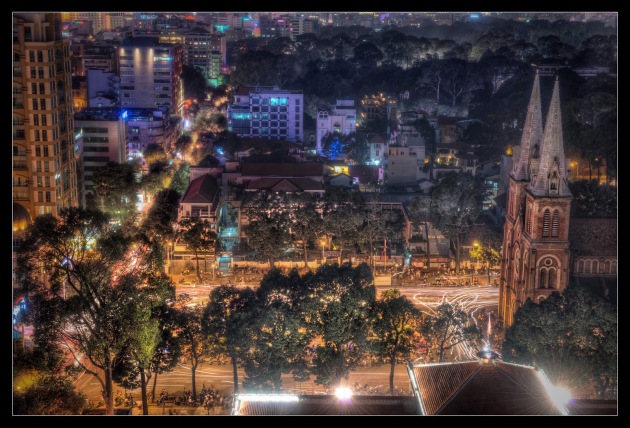 Our countdown is on now toward a three month+ round the world trip starting in mid-April. I’ll be traveling with my wife, the fearless Finn Mirja Murray. She and I will set out next month bound first for Saigon, ATL-IAD-BJS-Saigon. We’ve rented an apartment for three weeks: 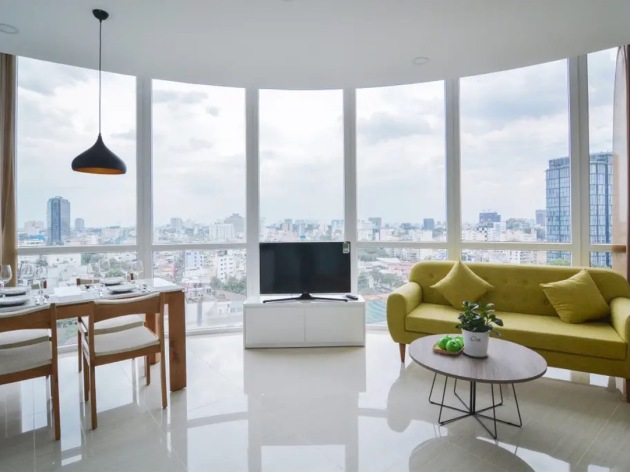 It’s just off Le Loi and just above the Ben Thanh Market. We are coming from the ethnic food-constrained southern Appalachians and looking forward to eating well. Destinations beyond Saigon are up in the air for now. While we’re in Vietnam we hope to get up to Hue for a look at the work my friend Chuck Searcy is doing with Project RENEW. Chuck says, “A visit there brings into sharp focus the continuing legacies of the war that we’re trying to mitigate, unexploded bombs and mines (UXO) and Agent Orange / dioxin.”

Our ultimate mission is to make it to Finland by the time it’s summer there, sometime in June. We have a mökki, a cottage by the lake there. We’ll have to work out the route between Southeast Asia and Northern Europe. Just now I’m keen on flying HAN-IST-Tbilisi and enjoying some fine Georgian hospitality while we wait another few weeks for Finland to warm up, but that is subject to, even likely to change. Any other suggestions?

Meanwhile, from now to then, we’ll try to post a photo a day from previous trips to Vietnam on Twitter, where I am @BMurrayWriter, please follow, and all the photos we post will propagate day by day on Earthphotos.com, too, at this URL: https://www.earthphotos.com/Other/Around-the-World-Slowly-2019/.

This is a wide open, open ended trip. Please help us by lending your expertise. Do weigh in. Or, if you’re local in any of our destinations, please allow me to buy you a beer. 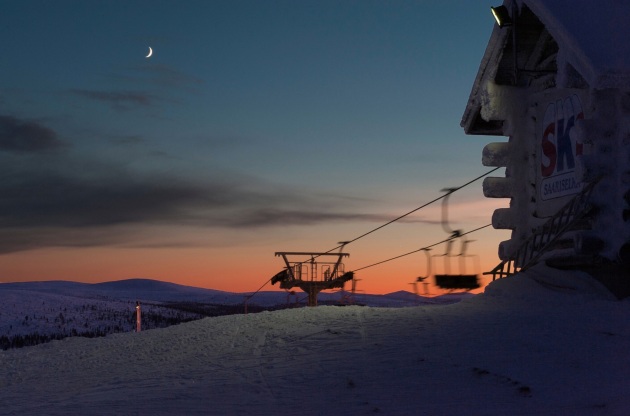 “Enontekiö – the land of northern lights & polar night.” Click this static image for the live webcam: 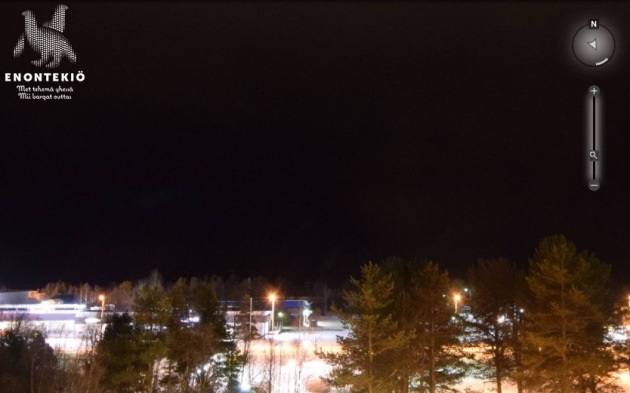 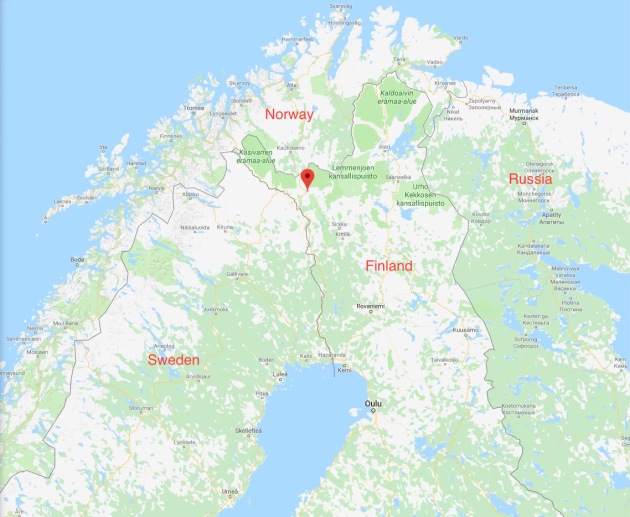