I’ve been reading about the two year old Chinese-built Addis-Djibouti train line lately. It’s a train journey we’d hoped to make this past spring before the virus intervened, and I’m hopeful we can come back and fill in that trip later.

Although northern Ethiopia is going through a terrible period just now, it’s such a photogenic country, I really recommend it to anyone with a camera and a sense of adventure. Warm people, good food, exotic everywhere you look, what’s not to like?

Here’s Addis Ababa a few years ago. More Addis photos in the Ethiopia Gallery at EarthPhotos.com.

In the mid-nineteenth century, Walter Bagehot wrote that to preserve the monarchy, “We must not let in daylight upon magic.” If you try to see much other than the royal wedding this weekend on BBC World, you’ll be convinced (resigned?) that the Brits do “the magic” maddeningly well.

So, read, I say, and here are a few worthy articles:

Living in a Cycle of Fear and Danger (in Kabul) by Ali M Latifi in Roads and Kingdoms
The Jaguar Is Made for the Age of Humans by Nadia Drake at The Atlantic
What Can Chimpanzee Calls Tell Us About the Origins of Human Language? by Michael Wilson at Smithsonianmag.org
Neoliberalism is a real economic model – here’s how the left can overturn it by Paul Mason at New Statesman
How Democracy Dies by John Gray at New Statesman
Americans are Being Held Hostage and Terrorized by the Fringes by Tim Alberta at Politico

I mentioned a couple of weeks ago that I’m working through The Road to Unfreedom by Timothy Snyder and that I think he’s pretty brilliant. Sophie Pinkham doesn’t think so. She has written Zombie History – Timothy Snyder’s bleak vision of the past and present in The Nation.

One last note about a column last week: I think The Fall of the German Empire by Ross Douthat in Wednesday’s New York Times is thoughtful. He calls Germany’s economic dominance of Europe the “third German empire,” writing,

“…if the test of Europe’s unity feels like a test for liberal democracy, it’s a mistake to see it only in those terms. It is also a struggle of nations against empire, of the Continent’s smaller countries against German mastery and Northern European interests, in which populist parties are being elected to resist policies the center sought to impose upon the periphery without a vote. And the liberal aspect of the European system wouldn’t be under such strain if the imperial aspect hadn’t been exploited unwisely by leaders in the empire’s German core.”

And finally, if HDR photography entertains you, like these two photos from the Mercado in Addis Ababa, you’ll find 579 more in the HDR Gallery at EarthPhotos.com. 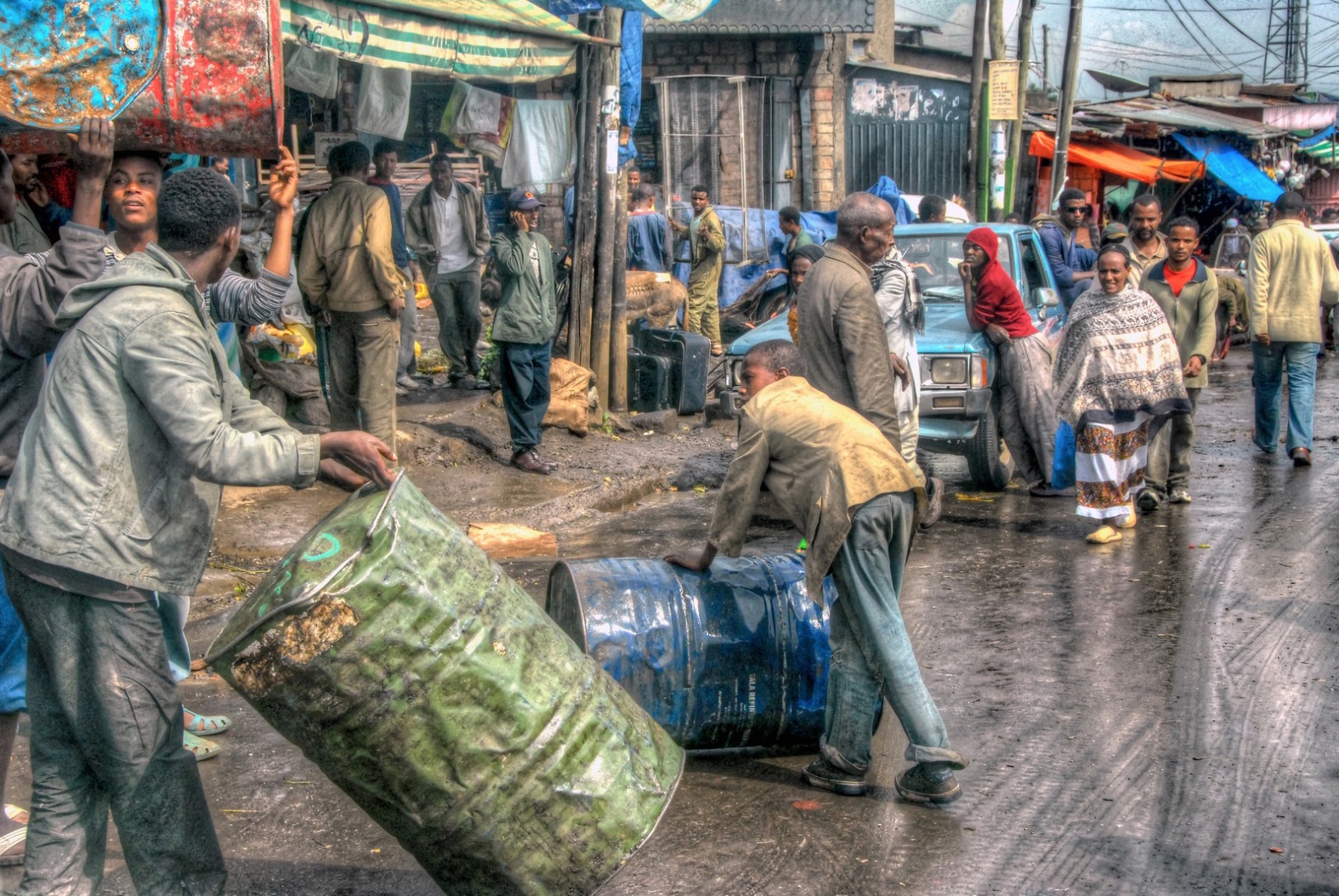 Some suggestions for your leisure time this weekend: on Twitter this week, I have a series of HDR photos, like this photo from the Hoi An, Vietnam market. That’s @BMurrayWriter.

To start, a bit of positive news this week, from George Monbiot:

Hello friends. I'm back home and walking (slowly). I'm told the operation went well. My care was exemplary throughout, and everyone who treated me was lovely. Long live the #NHS!

Monbiot is author most recently of Out of the Wreckage: A New Politics for an Age of Crisis. To get an idea of his general worldview, watch this YouTube video called How Did We Get into This Mess from a book talk with John Lanchester.

Incoming National Security Advisor John Bolton wrote an article in 2015 with the headline To Stop Iran’s Bomb, Bomb Iran. He thought then that “only military action like Israel’s 1981 attack on Saddam Hussein’s Osirak reactor in Iraq or its 2007 destruction of a Syrian reactor, designed and built by North Korea, can accomplish what is required. Time is terribly short, but a strike can still succeed.” Here is a piece he wrote in the National Review last summer called How to Get Out of the Iran Nuclear Deal.

Colum Lynch and Elias Groll write at Foreign Policy, “Bolton has explicitly called for a preemptive strike on North Korea, advocates bombing to force regime change in Iran, and wants an open-ended military presence in Afghanistan. He has also called for a much more confrontational stance against China, including stationing U.S. troops in Taiwan.”

At the same time, CNBC reports that Incoming Secretary of State Mike Pompeo “has … expressed disdain for a 2015 nuclear deal aimed at limiting the country’s (Iran’s) nuclear energy program … (saying) I look forward to rolling back this disastrous deal with the world’s largest state sponsor of terrorism.”

An evangelical Christian, Pompeo is “a longtime die-hard opponent of the Islamic Republic, who has for years advocated for a policy of regime change in Tehran,” says CNBC.

It may be a long, hot summer. This morning, moderate punditry is busy trying to convince itself that this team won’t be a disaster. One thing to look forward to: McMaster’s book.

And then there is this:

And perhaps a sign of a different set of worries to come: Pakistan Is Racing to Combat the World’s First Extensively Drug-Resistant Typhoid Outbreak by Meher Ahmad at Scientific American

Learning about whaling and visiting the defunct Við Áir whaling station in the Faroe Islands for Out in the Cold instructed me about the whalers’ life, about which I knew nothing. The last whalers by Lyndsie Bourgon at Aeon.com describes the winding down of a brutal way of making a living.

And a few more worthwhile articles:

Cows with character: How much can we read into animal behavior by Jennie Erin Smith at the Times Literary Supplement

In books this week, Red Hangover: Legacies of Twentieth-Century Communism by Kristen Ghodsee in due in the house via Prime tomorrow. It’s kind of specialized, granted, but it’s an area of interest to me. I spent a fair amount of time riding the rails around the newly-freed East Bloc in the early 1990s.

This bit of the description got the book into my shopping cart: “Just as the communist ideal has become permanently tainted by its association with the worst excesses of twentieth-century Eastern European regimes, today the democratic ideal is increasingly sullied by its links to the ravages of neoliberalism.” Can’t argue with that.

Here in southern Appalachia we had day-long snowfall at midweek and now we look for springlike conditions over the weekend. Wherever you are, go and have some fun this weekend. Cheers for now.

Here’s a three photo panorama of Helsinki, Finland from the roof of the Sokos Vaakuna Hotel across to the main train station. Love that Nordic light.

I’ll be posting a new photo most days for the next month or so from our June trip to maritime Canada, the French overseas territory of St. Pierre et Miquelon, Iceland and England. We start with the tiny harbor on tiny St. Pierre island, just off the southern tip of Newfoundland.

Here are five shots from Gangtok, the very picturesque capital of Sikkim, a former kingdom now part of India, tucked in between Nepal and Bhutan in the Himalayas, up against the Chinese border. Click to enlarge. 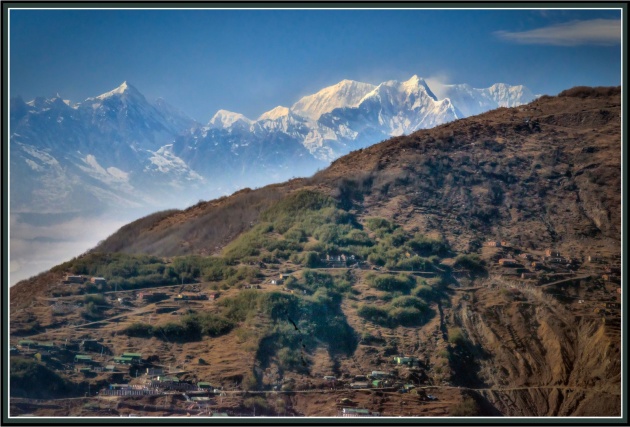 And finally, Mt. Kangchenjunga‎, the World’s Third Highest Mountain, along the Road to Changu (Tsomgo) Lake, Sikkim. That’s quite a drive.

Blowing glass in Halifax, Nova Scotia. An HDR. More photos in the Canada Gallery and the HDR Gallery at EarthPhotos.com. And see all the Friday Photos.

Worshippers at Trinity Ethiopian Orthodox church, Addis Ababa, Ethiopia. Click to enlarge. See 87 other photos in the Ethiopia Gallery at EarthPhotos.com. And see the 40 other Friday Photos. 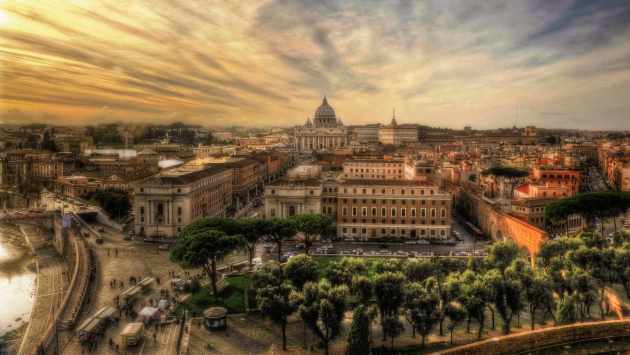 A brief diversion from Africa today. On the occasion of his visit to New York, here’s an HDR of Pope Francis’s house. Click it, because it looks better bigger. See this photo and 578 more in the HDR Gallery at EarthPhotos.com. And see all the Friday Photos.

There are 87 more photos from Canada in the Canada Gallery at EarthPhotos.com. And see all the Friday Photos.

Have a good weekend!