They’re hanging on every word.

A 2009 study by the sociologist Tanya Stivers at the University of California, Los Angeles, and her colleagues found that it’s the norm in most languages and cultures to avoid overlaps and to take turns in conversation, with some local variation. Delivering an affirmative response to a question within 36 milliseconds is judged ‘on-time’ in Japan, while in Denmark you can take 203 milliseconds and still be judged timely. Even though the ‘huge’ inter-turn Nordic silences observed by non-Nordic anthropologists aren’t all that large, such comments reveal that deviations from one’s own acculturated norms are seen as highly salient. In other words, what is experienced as a ‘delay’ – and thus as an indicator of dissent, since confirmations are generally delivered faster than opposing statements – differs across cultures. A congenial Danish tourist in Japan might well be puzzled to find herself taken for something of a contrarian.

This is the sweetest little paean to anti-corporatism you’ll ever hear. And it’s only a couple minutes long. Like, two. You too busy for that?

Asheville’s just a couple hours up the road, so I know what he means, because there are dwindling few places you can go around here, before you go to Lowe’s.

Each record was unlike the last, each with fresh aesthetic propositions to test, each ready to die trying. Listen to the right one at the right time in your life, and you feel like a doctor just handed you an ultrasound of your soul.

Speaking for myself, I can testify. Maybe that was then.

“Sartre said that hell is other people. I believe that most of them are.”

Van Morrison, apparently, is a homeboy. He seems to prefer intimate settings for concerts around his hometown, and he does a couple a year. Back on St. Patrick’s Day Eve in 2015, we enjoyed a concert for just 300 at the Europa Hotel in his hometown of Belfast. Please enjoy this recording of the song that contains this quote, said to be from the audio board from a similar concert at the Culloden Hotel, Belfast, January 2013.

Some photos from the show in Belfast. 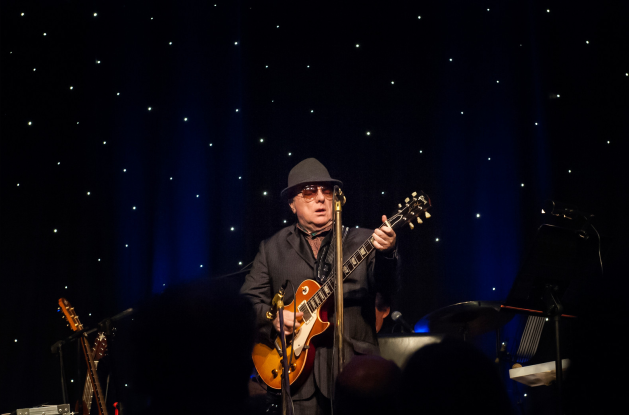 … while practicing on his imaginary clarinet.