This week’s United Airlines debacle raises questions besides the violation-of-decency-in-search-of-corporate-efficiency one. The Libertarian blog Reason makes a salient point under the headline Why Should Police Help United Airlines Cheat Its Customers?

Blurring the lines between private enterprise and quasi-law enforcement bodies makes me nervous. When it’s just you and me, hapless Joes trying to catch a flight, who really knows who has what authority in airports?

The men who hauled that United passenger down that aisle were Chicago Aviation Police, unarmed, sorta real cops who play “an important, supplementary role in keeping [Chicago airports] safe by overseeing access points.”

Would you know that at the moment they muscled their way down the aisle? Does it matter? Should you just instantly cave in forfeiture of your rights to anybody in uniform? It seems like that’s what the enforcement cadres would prefer, in the name of keeping you safe.

There are God knows how many entities said to be looking out for your best interests in airports. Homeland Security people, uniformed TSA people, your local police, anybody an airline or rental car agency or for that matter, TGI Fridays down in the food court might slap a uniform on. If the guy who drives the Marriott shuttle and wears the official cap yells and screams real authoritatively, what about him, too?

In a sympathetic article from many years ago, “Chicago-area airport security chief Jim Maurer” says “What I think is unique about airports is this is a business. And our job is to make sure that that business is conducted efficiently. We’ve got to get people in and out of the airport and we’ve got to get them to their destinations. There’s a whole different perspective.”

Sure is a different perspective. We’re not enforcing laws. We’re making sure business, like United Airlines’ business, is conducted efficiently.

So why are they called police? Why are government bodies in service of private profit-making?

I was flying around doing reporting trips for my book Out in the Cold in 2015, and once after returning from the Arctic, I found a card the size of the customs form inside my bag.

“Notice of Baggage Inspection from the Department of Homeland Security: To protect you and your fellow passengers your bag and its contents may have been searched for prohibited items. At the completion of the inspection, the contents were returned to your bag.”

They say “may have been.” I’m pretty sure that if they didn’t open the bag I wouldn’t have found the notice inside. You figure?

“If the TSA security officer was unable to open your bag for inspection because it was locked, the officer may have been forced to break the locks on your bag.”

“TSA sincerely regrets having to do this, however TSA is not liable for damage to your locks….”

The Department of Homeland Security claims their entitlement to the inside of your property in the name of your security. This is unsettling because what might they need to seize next to keep you safe? Your social media passwords?

Unsettling too because this week cops can haul you bleeding from your paid-for flight. Note that after auditioning all the other options, United CEO Munoz finally apologized, but no enforcement organization I’m aware of has distanced itself from the Chicago Aviation Police.

You just wait for the day that TGI Fridays cop splays you out on the floor on account of your complaint about the cold fries.

YOU’RE IN THE AIRPORT. I’M HERE TO KEEP YOU SAFE. 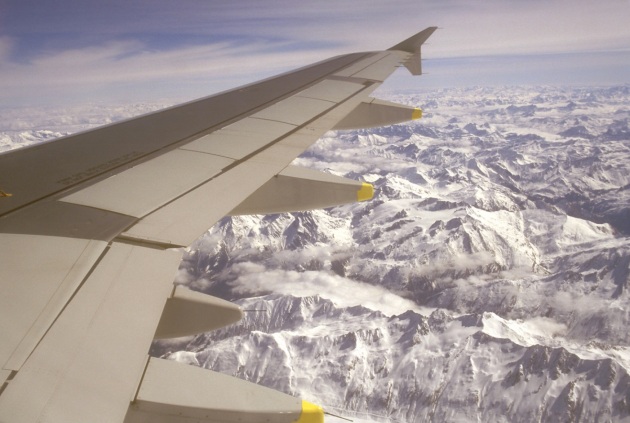 The frowning, sometimes dimly-qualified, testosterone-pumped enforcement cowboys whose gauntlet you must run these days to all the airlines’ friendly skies may wish to think otherwise, but the interior of an airplane is not a war zone. Although you wouldn’t know it on this day.

Honest now, most likely United Airlines chairman Oscar Munoz, like a thousand other captains of industry, kissed his wife and kids and obeyed traffic rules this morning on the way to the office. There is no reason to believe he did anything besides look after his shareholders’ interests right up until, entirely outside his control, an incident occurred on board one of his planes waiting to leave O’Hare airport.

Mr. Munoz’s company needed four of its employees to be somewhere other than Chicago and all of the passengers declined to volunteer their bought and paid for seats for the airline’s benefit.

The airline tried to bargain with its customers. The first offer? $400. No takers. The second? $800. Again, no takers. People gotta go where they gotta go. Interesting to note: rules are, passengers are eligible for up to $1,350 for such a disruption but United Airlines apparently decided not to offer more than $800. They preferred to enlist strong men to haul a paying passenger from his seat instead.

It would appear that in the wake of the incident, after a wavering moment of incipient decency in which Chairman Munoz called the incident “an upsetting event to all of us here at United,” the chairman tilted awry by calling the bumped passenger “disruptive and belligerent.” Said he, the airline agents “were left with no choice but to call Chicago Aviation Security Officers to assist in removing the customer from the flight.”

Oh, Lordy, whether the passenger was belligerent or not (and none of the emergent videos, see here, here, and here, demonstrate such), this was exactly, precisely, even perversely the wrong response.

The passenger declined to be forcibly bumped from a flight he had paid for with money or airline miles, because the airline thought a better use of his seat was to transport its own employees. (And answer me this, why should police abet the airline in the airline’s wrongdoing?)

A single event won’t usually overtake a career. On this one, Mr. Munoz, who was under fire just last week for denying passage to teenage girls for wearing leggings, just might get caught up in the deluge. Sometimes, a constituency beaten down for long enough will rise up. Sometimes a big enough misstep from the loftiest heights can lead you over the corporate cliff.

Even while I have written just now, I see 2310 new Tweets with the hashtag #United. Since Mr. Munoz kissed his wife and kids this morning, I wonder if he may have kissed his job goodbye.