Just a very quick swing through Germany, Poland and Estonia this week, while still Finland-based and largely off duty through July. Wrocław, Poland (Breslau when it was German) seems to be largely off American tourism radar, and there appear to be few Americans here.

It’s just a straight four hour ride east from Dresden. Would be easy to include on any trip to the much more popular (for Americans) Berlin, Dresden and Prague.

This morning I climbed the bell tower of St. Elizabeth’s Church to show you these views of the Old Town and the Oder River: 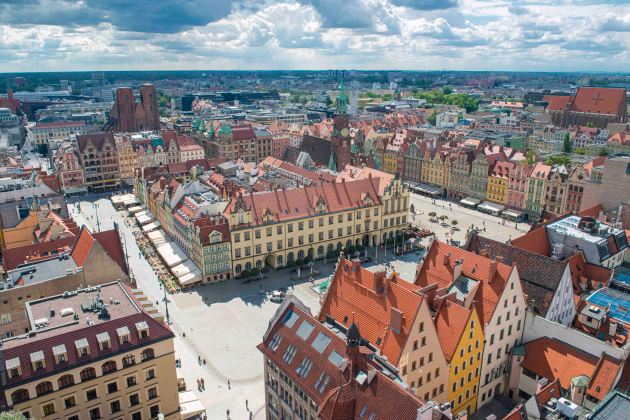 Photos from this slow trip around the world, which started in April in Vietnam, are collected here. 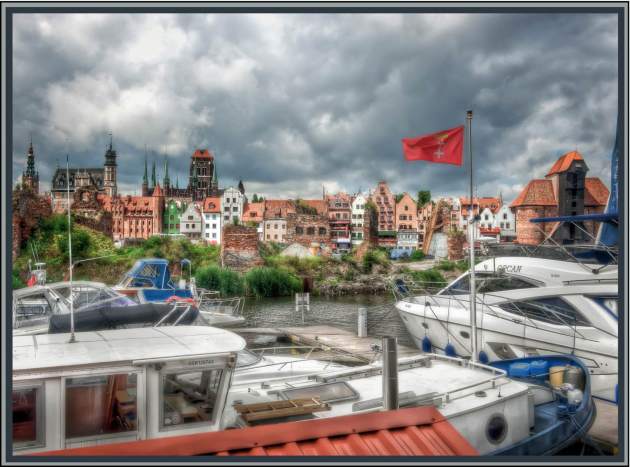 Want to share what I think is an insightful article on the current state of politics in Poland in The American Interest. It’s by Gazeta Wyborcza columnist Katarzyna Wężyk. Read it here.

Here are some quotes:

Polish “Neo-authoritarianism … accepts democratic elections. But … only as a way to give the majority a mandate to govern unencumbered by minority rights.”

“We ‘normal’ people have to stick together, the pitch goes, form an impenetrable front against dangerous outside forces, and not let our unity be eroded by pity for the undeserving.”

“Polish neo-authoritarianism is … based on shared hostility toward the elites and the weak—women, refugees, those with ‘pathology’ (that is, the poorest, people with alcohol or drug problems, broken families)—and bound by the sense that “normal” people have a right to dominate these groups.

The figure of a refugee— the ultimate Other, so different as to be barely recognizable as human and thus dangerous—was significant in ensuring a PiS (Law and Justice Party) victory. (PiS leader Jarosław) Kaczyński warned during the campaign that migrants carry ‘all sorts of parasites and protozoa, which, while not dangerous in the organisms of these people, could be dangerous here.’”

“Law and Justice gave its supporters … a kind of empowerment, albeit an empowerment that comes from the ability to humiliate, belittle, and bully others, and then to feel justified in so doing. It offers a surface narrative of regaining dignity, acquiring national pride, and restoring justice; but its underside exudes darker undertones of punishment, exclusion, and contempt.”

Warsaw, Poland and the Vistula River

Only one must-read this weekend from here in soon-to-be-stormy Appalachia:

A Warning From Europe: The Worst Is Yet to Come, an epic, semi-autobiographical article by historian Anne Applebaum in The Atlantic magazine.

Ms. Applebaum has written extensively on the former Soviet Union and East Bloc, including a book that was really seminal for me, called Between East and West: Across the Borderlands of Europe, about a 1991 road trip across just collapsed eastern Europe. A Washington Post columnist married to Radek Sikorsky, a former Polish Foreign Minister, she’s uniquely positioned to write a first-person account of the changes in Poland over the past not quite thirty years.

And there have been astonishing changes. On my first trip to Warsaw, in March and April of 1992, state-owned enterprises, the stores in the buildings that lined the streets, had largely gone bust, and newly private commerce from Gdansk on the Baltic Sea to Tiranë, Albania on the Adriatic, was largely carried out through an ad-hoc system of hastily-assembled kiosks between the storefronts and the streets, Here is an example from near the Warsaw train station, a snapshot from 1992: 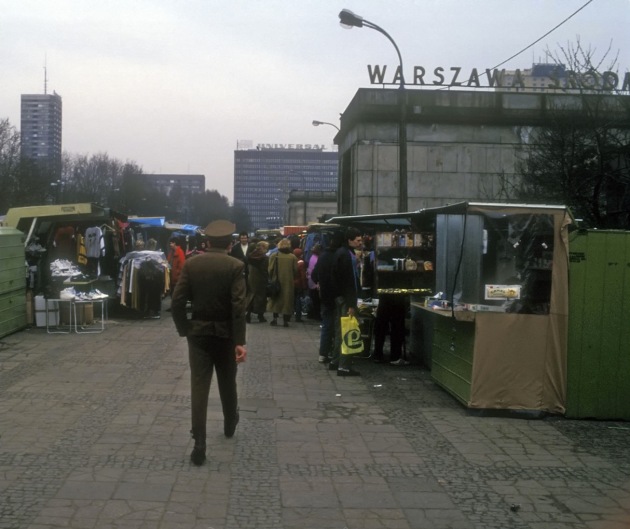 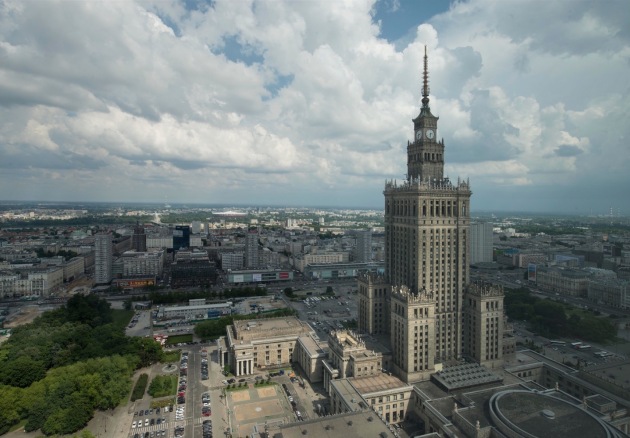 But all is not well, in Poland or as Ms. Applebaum describes, Hungary and other parts of eastern Europe as well. Her article is well worth your time as a marker of the state of the region today. Especially if, as we look to be here, you are shut indoors with a storm raging outside.

Next week we return to Africa with a post on 3 Quarks Daily at the beginning of the week. I will repost it here next Wednesday. See you next week. 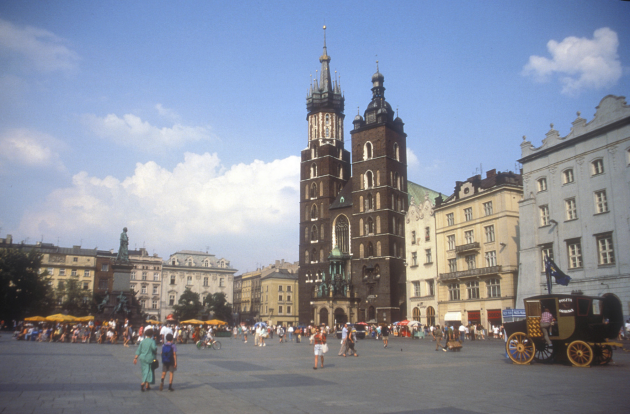 One afternoon in the autumn of 1978 I came screaming across Atlanta in my Chevette, rushing from a job fifty miles up the road, hurrying to meet my friends at the IHOP. My adulthood so far was a scramble of post-college roommates, general naïveté and a bad job, with all the self confidence that just having been turned down for a VISA card would allow.

I paid no attention that day, October 16th just like today, when a puff of white smoke over the Sistine Chapel announced the first non-Italian Pope in 456 years. Karol Wojtyla, the vicar of Krakow (his church, above), chose the regnal name John Paul II.

If we’d said things like that back then, looking back I’d have said, Whoa, dude. It was a pretty darned fateful day.

Josef Stalin scorned the church. “The Pope! How many divisions has he got?” he would sneer. The year he said that, 1935, was a long time ago. But on December 1st of 1989, eleven years one month and fifteen days after that puff of smoke in Vatican City, Stalin’s successor, Mikhail Gorbachev, came hat in hand to Vatican City, pleading that the Pope return the favor with a visit to the Soviet Union.

Stalin’s heir needed the Pope more than the other way around, and John Paul II was noncommittal, replying that he hoped “developments would make it possible for him to accept.”

I do not believe in Catholic doctrine. That autumn day in 1978 I didn’t believe in much beyond my disc-jockey job, rock bands of the moment and girlfriends. But with hindsight, with time enough to have visited Krakow and Gdansk, and Warsaw as both Soviet satellite…

I respect that Polish Pope for his hand in shaping the events that puff of smoke helped set in motion back in October 1978.

Pope John Paul II came to visit Dubrovnik, where we happened to be visiting, on my birthday in 2003. We stood close enough to the Popemobile to be able to read his watch. 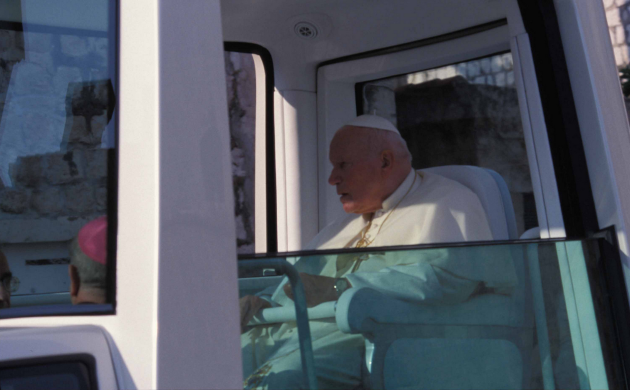 Me, I got this uneasy feeling. It may be that them what know ain’t saying and them saying don’t know, but the Polish PM and NATO are queasy, and when the Russian UN ambassador calls for “humanitarian intervention” and the Putin team uses RT to wail it, it looks like boxes are being checked for an invasion. The U.S. Defense Secretary is in the region, saying as much. It’s a good thing everybody’s got so much confidence in our president.

I’d guess it would start overnight one night, and since we’re seven hours earlier here on the U.S. east coast we might find ourselves up all night one night soon working the internets and the news channels. Just in case, here are a few internet resources and live TV feeds from the region:

I’ll add more as I find them. Please suggest others, if you like.

I spied this fellow on the floor of an art department building at the University of Warsaw. His resolute upward-and-onward gaze fits somewhere between really looking to the future and Soviet propaganda posters. Sort of like Poland.